With You Season 2 now out for worldwide release on Netflix it’s time to break down everything that you need to know about the show and it’s ending.

Throughout this video we’ll be discussing all the ins and outs of Joes…I mean Will’s new life and giving our thoughts on the series as a whole.

There will be Heavy Spoilers here so if you haven’t had a chance to watch all of Season 2 yet and don’t want to know what happens then I highly suggest that you turn off now. If you wanna know our general thoughts then head over to our none spoiler review which will be linked above.

With that out the way I just wanna give a huge thank you for clicking this video, now let’s get into our breakdown of You Season 2!

After Candace confronted Joe at the end of the season one the two went for a talk in which she promised to ruin his life and destroy him in the same way that he destroyed her.

In order to escape his shady past, Joe ups sticks and moves out to LA, changing his name to Will, Will Bettelheim, in order to lie low and carve out a new life for himself.

Seemingly Will has had a huge change of heart and has decided that he must avoid what he considers Love so LA, where everyone is apparently too in love with themselves to love anyone else seems like the perfect opportunity.

Unfortunately, love is difficult to get away from and after he gets a job at a new book store once more he bumps into a newly widowed character named, well…Love.

She seems like the perfect woman for him and the two star crossed lovers look like their fates are written in the stars. Love played by Victoria Pedretti, who you may remember from The Haunting Of Hill House, expertly plays the character and you can instantly see why Will is swept up in her sweet and bubbly persona.

However, at the end of the first episode we learn that Will is in fact only lying to himself and his and Love’s entire meeting was staged by the character who began stalking her upon arriving in LA.

It’s a huge twist early on that I think will instantly engage viewers and I as I was watching this reveal, I can’t lie I was like ‘damn.’

We also discover that Will has a man trapped in a cage in a storage unit that is actually the real Will, played by Gotham’s Robin Taylor. This Will has spent the last ten years carving out a false identity and though he offers this service to John Mayer I mean joe, he needs it faster and thus takes his as a shortcut, trapping him in a cage similar to the one that he had Beck encased in during the first season.

Juxtaposing the original entry, Will let’s the real Will free in order to prove he’s a good guy. However this also begs the question if Joe was ever really Joe. Maybe he was in Gossip Girl.

The season deals very much in how taking on the identity of someone else not only provides Will with a lot of positives but also it inherits his problems as well such as a man named Jasper who the original Will ripped off.

Again this follows the subtext of duality and how every character is hiding a dark side to them in order to present their perfect life. On social media couples often do this and go above and beyond to achieve this, acting in unnatural ways, posing and removing the negative elements of their outward appearance in order to portray their relationship as something amazing.

Love does this literally and edits, removes and takes away all of the negative aspects of her life in order to get everything that she wants.

Love divulges that throughout her life, similar to Joe she has murdered, killed and manipulated in order to live what she deems as the best life she could.

She killed Forty’s first love, manipulates Will and it is possible that she killed her husband. 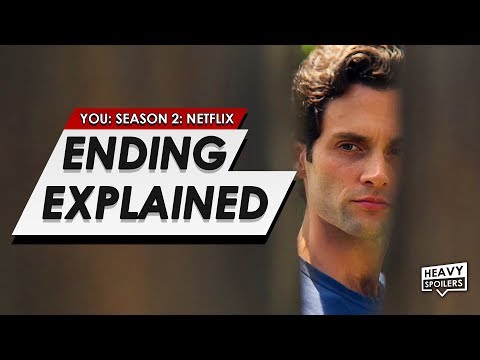