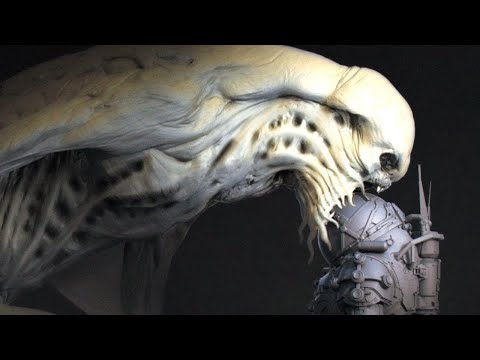 The Underwater (2020) horror movie explained in Hindi Urdu. The American thriller horror film “Underwater: Sea Monster” story summarized with a full ending in हिन्दीexplanation. The plot revolves around the sea monster hiding in the Mariana trench that has big spawns and the power of destroying not just aquatic life but big ships too. According to a regular day, we see an oceanic researchers group doing their work, which includes our female protagonist. All these people are working for an underwater drilling company which is very deep in the sea. One day suddenly the mysterious Earthquake arrives and their entire facility is destroyed. Group of survivors barely save their lives. They had to go to a place where they could contact the upper surface. After planning, they go to that safe side, but encounter the deadly sea creature on the way. Because of which, they have to face the difficulties, as a girl is swallowed by a monster. It is the tale of Lovecraftian horror in the bottom of the Mariana Trench. How will you be able to escape from that Awakened creature while you are below the 7 miles ocean surface? If you had been the place of these marine researchers, would you have been able to face this sea monster? Please Like, Share, Subscribe.

Underwater is a 2020 American sea monster based fiction horror film horror film (Lovecraftian Horror Movie Explained in Hindi). In my opinion, the writer has written a story that takes us on a relentless thrill ride under the water. We can see scares; have its thoughtful flashes, thriller suspense, emotions and little moments of fear. It is not much horrific but definitely an exciting and entertaining film to watch. We highly recommend you to watch “Underwater” to all of you.

Disclaimer: Any footage in this video has only been used to communicate a message (understandable) to the audience. According to my knowledge, it’s a fair use under reviews and commentary section. We don’t plan to violate anyone’s right. Thanks.