If you enjoyed this video then please subscribe to the channel https://www.youtube.com/channel/UCq3hT5JPPKy87JGbDls_5BQ?sub_confirmation=1

Get some awesome Heavy Spoilers show clothes, phonecases and accessories at – https://teespring.com/en-GB/stores/deffinitions-store

If You Want To Help Support The Channel So I Can Make More Videos Like This Please Donate Here:
https://www.patreon.com/user?u=7516708

Join our Discord Community at – https://discord.gg/dDMJN4a

Listen To Audio Recordings Of The Show at – https://voicehub.app/podcasts/heavy-spoilers

The Mandalorian Finale is finally here and it’s time to break down everything that you need to know about the ending of the Season.

Throughout this, we’ll be breaking down everything that you need to know about the new releases’ overall plot, big death, mindblowing moments and Easter Eggs.

The Mandalorian Episode 8 Breakdown
Episode 8 picks up on the huge cliffhanger at the end of Episode 7. The Speederbikes have Baby Yoda and Mando, Cara and Greef Karga are in an impossible situation.

Where Episode 8 differs slightly though is that the introduction actually starts off with a dark sense of humor, referencing how Imperial Warlords like to kill their own men as acts of aggression and this is something that we’ve seen throughout Star Wars history, most namely Darth Vader who had no problem offing his own troops.

They practice shooting at some scrap and miss which is a nice call back to the old Star Wars joke that Storm Troopers can’t aim.

The Troopers kinda bumble back and forth and it’s a comedic moment until they cross the line and hit Baby Yoda. You don’t hit Baby Yoda and here to make sure that they pay for it is IG-11.

After the death of Nick Nolte last week, I’m just calling him that cos every time I pronounce it Kweel or Kuill I get in trouble in the comments, he’s back to avenge his master.

There were a lot of theories last time that IG-11 had turned bad and cemented the Mandalorians prejudice against droids, showing that you can’t really reprogramme them but the bot is back to prove him wrong and we do know that he did not kill his master. I did theorise this last week as the concept art did show the Speederbikes firing at the character so we could assume that it is these two that killed him.

IG-11 takes them out with no effort and it’s an awesome rescue scene that I loved watched. But, this is no time to celebrate.

Moff Gideon is still at the village with a squadron of Stormtroopers and Death Troopers that are ready to take Mando and co down.

The Stormtroopers begin set up an EWeb Heavy Repeating Blaster, thank god he said it cos I didn’t know, whilst the group try and escape the situation, aiming to get to the sewers.

This is very similar looks wise to the one on the Death Star that we saw in a New Hope but they must have re-enforced them since then because this one isn’t opening with a couple of blaster bolts.

Later in the episode there is reference to The Mandalorians, most notably their leader: Mandalore The Great, who fought an army of sorcerers named the Jedi.

Dyn became so attached to The Mandalorians because they saved him. He was raised in the Fighting Core and became the man that we know and love. Gideon would only know his true name if he had access to information seized during the Purge and thus he’s clearly been keeping tabs on the characters.

Gideon makes a massive impact and the dialogue is awesome here, painting the character out as one of the most intimidating villains we’ve seen for a long time.

He gives them till nightfall to co-operate though this doesn’t go down too well with most of the group.

Cara wants to shoot her way out as she won’t be subjected to A Mind-Flayer which is a call back to Dungeons and Dragons and also Stranger Things. 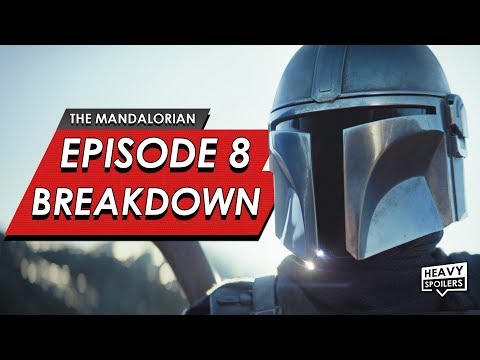