If you enjoyed this video then please subscribe to the channel https://www.youtube.com/channel/UCq3hT5JPPKy87JGbDls_5BQ?sub_confirmation=1

If You Want To Help Support The Channel So I Can Make More Videos Like This Please Donate Here:
https://www.youtube.com/channel/UCq3hT5JPPKy87JGbDls_5BQ/join

Get some awesome Heavy Spoilers show clothes, phonecases and accessories at – https://teespring.com/en-GB/stores/deffinitions-store

Follow Me On Social Media At:
https://www.facebook.com/DeffinitionMC/
Tweets by heavyspoilers

Join our Discord Community at – https://discord.gg/dDMJN4a

Ok so Episode 4 opens with women discussing what their idea of love is. This is revealed to be auditions for The Deep’s wife but it actually thematically ties into the episode itself with pretty much all of the characters defining what love is for themselves and then realising that they aren’t really able to have it.

Frenchy sees it as caring for someone in a moment that they feel loss and because of this he makes a move on Kimiko but he’s rejected., Hughie and Annie almost get it but because of Vought they’re unable to. Mother’s milk discusses it in a story about his father, Billy through his his wife and Homelander…well Homelander goes on a pretty crazy arc.

Now he’s quickly becoming my favourite character for all the wrong reasons.

Up until this point he’s pretty much been the most adored person on the planet.

Everyone seems to love him and because of this his ego has gone completely out of control. Homelander felt so much love towards himself that the only person he ended up loving was himself.

Things change though with Stormfront becoming the face of the Seven and slowly he watches as all this love is stripped away and turned into hate.

He pretty much relies on public admiration in order to feel good about himself but throughout he realises how shallow that truly is and in the end comes to the conclusion that he doesn’t need anyone to love him at all.

Pretty much every character in the episode tries to hold onto the thing that they love dearly and because of this they almost feel like they’ve lost at the end except for Homelander who decides to let it go and thus he can move on.

We’ll get into it in a bit but after the auditions we cut to Frenchy who’s mashed off his face and he makes a move on Kimiko who is still reeling from the death of her brother. In the wake of last week we learn that her Kenji has been blamed for the murders carried out by Stormfront and the superterr…villains are further used as a weapon by vought in order to draw the publics attention away from the compound v reveal. 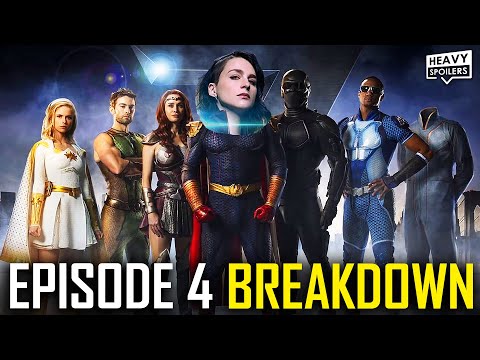