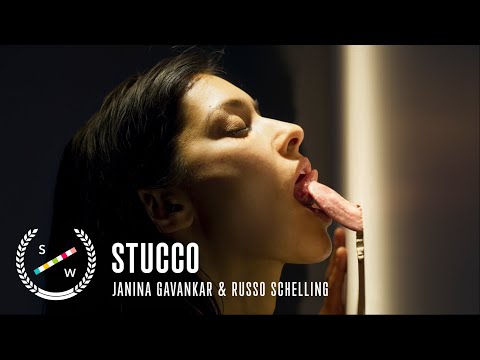 While hanging a piece of art in her new home, a woman knocks a hole in her wall, revealing what might be another room… Her mind unravels as she wonders what could be on the other side.

Part of our #SXSWshorts coverage of films affected by the cancellation of SXSW 2020 (a new film every day from 3/15 to 3/20), Stucco from Janina Gavankar and Russo Schelling is a twisted psychological horror short film. While you won’t be able to see it in Austin, we recommend you gather your friends for a watch party because the reactions will be worth it!

A selection of Short of the Week, the web’s leading curators of quality short films.

“While hanging a piece of art in her new home, a woman unintentionally knocks a hole in her wall, revealing something sinister on the other side, in this twisted psychological horror from actress Janina Gavankar and Russo Schelling. Co-written by the pair, this elevated horror was fittingly selected to play in SXSW’s Midnight Shorts competition and it is as eerie and strange as the program’s reputation would suggest. Gavankar, known for her performances in the Apple TV+ original series The Morning Show and currently drawing rave reviews opposite Ben Affleck in the sports drama The Way Back, proves she’s a triple threat with her leading role in Stucco, providing a portrait of a woman beset on all sides by threats: real, supernatural, and from her own mind. If you were looking for a claustrophobic horror film to set the tone for your current or eventual self-quarantine, Stucco’s exploration of agoraphobia is the perfect watch!

In the film, Gavankar and Schelling “monsterize” their experiences with depression and anxiety to create a cathartic release via hair-raising horror. The modesty of the production is turned into an advantage via the script and production, as Gavankar’s character’s distress—a mix of a toxic relationship and mental health issues, prevents her from leaving the house. The team, in particular, cinematographer, Quyen Tran, leverages this single location to create an uncanny sense of unease with an odd god-like camera angle of the kitchen. The various shifts in perspective throughout the film turn what would be a familiar and safe place into a nightmarish playground. Simple and effective, Gavankar and Schelling’s use of framing force us to see the house the way the trapped character feels, and it’s altogether chilling. “We’ve always wanted to make work that examines the part of ourselves we’re least proud of. Sometimes before we can move on, we are forced to vomit our past, or sit in the mess we’ve made. Stucco is this, for us,” explains Gavankar to Short of the Week.

Did we mention Stucco was gross? The impressive practical effects by artist Frank Ippolito, who is a master in creature-making, are integral to the film’s lasting impact. A long human-like tongue probing through the wall is absolute nightmare fuel and we imagine it would be a fun scene to watch with a lively audience. It took four pulleys and two puppeteers on the other side of the wall to achieve the tongue’s motion and three people to create the…no spoilers, but…truly traumatizing “thing” at the film’s end.” – S/W Curator, Chelsea Lupkin

Reproduced on this channel with the permission of the filmmakers.