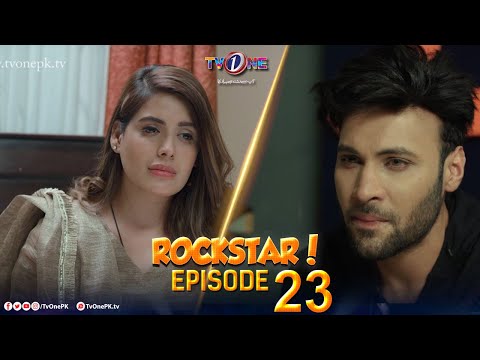 Rockstar Episode 23 TV One Drama
Watch All Dramas of TV One :

TvOnePK Subscribe to TV One Pakistan for unlimited entertainment

One Liner :
A story of intense hate and rage Afreen and Azaan are in love.
But Azaan’s powerful father wants Afreen for himself.
And he will destroy anyone who comes in his way. Even his own son.

Full Synopsis:
An intense, suspenseful story of a family where everyone is conspiring against one
another. And simmering emotions of hate and rage threaten to destroy many lives.
Young Afreen takes on a job as manager to a rockstar Azaan to be able to support her
family and provide care for her sick mother.
However, Azaan and she get off to a bad start and after many ugly quarrels, she decides
to leave. But Azaaan’s lecherous father Umar Ali, driven by lust for Afreen persuades her
to stay and starts manoevering to make her his wife. She rejects his proposal. Through
out this time Azaan’s young cousin Imran is very supportive of Afreen providing sympathy and friendship at this difficult time.
Gradually Afreen’s dignified personality and effective management of his career brings
her closer to Azaan and they start falling in love. But suddenly Afreen’s younger unmarried sister Maira’s pregnancy is discovered. Since Maira is a fan of Azaan’s music and has been seen with him many times, it is assumed that he is the father.
Furious at Azaan, Afreen now agrees to marry the middle aged Umar Ali. Now begins
another period of trials for Afreen while she faces the animosity and opposition of Azaan’s family and her own. And there is one evil person who wants revenge even if it means
destroying her.