I’ve always thought of the Porsche Macan as a small SUV. Relatively speaking, it is, because the Cayenne is the big one in Porsche’s SUV lineup. And compared with a Lincoln Navigator or a Range Rover or a BMW X7 or countless others, it is rather diminutive. But then I looked at the spec sheet for this new GTS and was surprised to find that it isn’t actually that much smaller or lighter than its peppery sibling. It weighs the better part of 4,400 pounds, which is only about 200 pounds shy of a Cayenne with the same engine.

With regards to the GTS and its 2.9-liter, turbocharged V6, the output is surprisingly tame given the hefty curb weight. Power is quoted as 375 horsepower between 5,200 and 6,700 rpm, while torque is 383 pound-feet from 1,750 rpm. Not bad numbers, mind you, but an Audi RS4 and even the best hot hatches (which weigh about 25% less than a Macan) have a power figure beginning with a 4. In fact, it places the GTS in a slight no man’s land below the real performance heavyweights like Mercedes’ AMG 63 models and the Alfa Romeo Stelvio Quadrifoglio, but above the second-tier AMG 43 or Audi S models. I realize the Turbo exists at the top of the Macan tree, but the jump to that has now widened when compared with the last generation. Previously there was a 40-hp gap between Turbo and GTS, now it’s 60 hp. Surely a GTS badge deserves more?

So, on paper, the Macan GTS doesn’t have a very impressive power-to-weight ratio for a performance SUV with a Porsche badge. But things get a little confusing when you look at the 0-to-60-mph time. With Sport Chrono fitted the GTS will hit the historic mark in just 4.5 seconds, which is hardly slow. And things get even more confusing when you drive the GTS down a good piece of road like the one I found in Portugal. From behind the wheel, the GTS not only feels small in terms of its size, it also feels really lively, quick and responsive in the way it accelerates.

The new V6 has moved the turbos inside the V, which shortens the path the exhaust gasses have to travel. The theory is that this should make for a more responsive engine and that’s certainly how it feels. Combined with the snappy, seven-speed, dual-clutch gearbox, the GTS really rips through its revs. It feels happiest living in the upper half of the rev range rather than leaning on low-end torque, but if you keep it on boil, then it leaps between corners like a puppy late for lunch.

What’s more, the chassis is a perfect match for the engine. I drove a base, 2.0-liter Macan recently, and although it initially felt like it should turn in with real poise, it never quite lived up to the promise. The GTS fulfills that potential. The steering gives you a decent idea of how the front tires are loading and the whole car pivots like a lofty hot hatch. Get on the throttle early and it even feels pleasingly rear-biased as it drives through and out of corners.

The car I tested had the optional 21-inch wheels but the standard steel-spring sport suspension (which rides 15 millimeters lower than that of the base Macan). There is an air suspension option, but I don’t think it’s necessary from a comfort point of view. I drove on some cobbled streets that had been made even rougher by roadworks and it was as plush as I think you’d ever need. On the more interesting sections of tarmac you do need to set the dampers to their firmest setting, Sport Plus, rather than just Sport, as otherwise bigger undulations can leave you with a bit too much wallow.

Rather pleasingly, you can jump between these and other settings via the myriad buttons on the transmission tunnel. Such a plethora of things to push looks a little old-fashioned given the modern trend for one big touchscreen (there’s one of those in the Macan, too), but I think it makes life much easier. The large gear selector looks slightly old-fashioned too, but again works well and is useful for resting your arm on while operating the aforementioned touchscreen. The other standout feature of the interior are the sports seats. Although they look like quite conventional chairs with separate headrests, the bolstering is plentiful and placed perfectly.

The only big disappointment is the sound of the GTS’ V6. The previous generation’s 3.0-liter V6 had a wonderful voice, but the new one has been muffled, almost certainly by the addition of particulate filters. It’s not an unpleasant soundtrack but it is a noticeably thinner noise that lacks depth and complexity. It’s a real shame, as it does slightly dampen the whole character of the car. 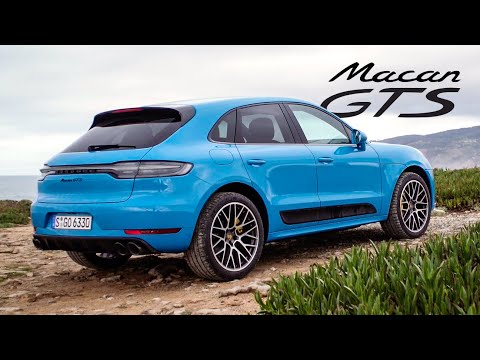