MATCHDAY LIVE WITH CHEEKA|MI VS RCB|REVIEW, PREVIEW & FANTASY PREDICTIONS|IPL2020 MATCH10: Our Fantasy predictions for this IPL has been out of the park. We called Rajasthan Royals win yesterday and what’s more all the main players that we picked played an important role, hope all of you considered our fantasy picks and won in your own fantasy leagues.
We are heading to the 10th Game and what an IPL 2020 we have had so far. Excitement, Sorrow, Inspiring and most importantly Entertainment to the MAX! These are the emotions that we felt in the previous game between the Rajasthan Royals and the Kings XI Punjab.
The game was mostly one sided until the 17th over and then out of no where Rahul tewatia showed us why he had the confidence of the team management and the captain steven smith to be sent in earlier than Robin uthappa.
Overall it was one of the best matches in the history of the Indian Premier League (IPL), Right from the Gully cricket type of hitting by Mayank Agarwal and KL Rahul, to the beautiful stroke play of Sanju Samson and then to the last few overs heroics of Rahul tewatia to bring the cup home.
I feel for Kings Xi Punjab and I really do! The fielding was outstanding and they did justice to having the great Jonty Rhodes as their Coach! Nicholas Pooran oof that effort is unforgettable in the boundary line. Overall the Rajasthan Royals just showed us that nothing is over until the last delivery is bowled in T20 Cricket, hats of to their perseverance and this match sets the tone for the upcoming matches.
Talking of the 10th game, The Mumbai Indians take on the men in Red the Royal Challengers Bangalore. Rohit sharma’s men are now looking like the champs they are meant to be after their comfortable victory over KKR. Rohit Sharma looks like his form is back and the other under rated player Surya kumar Yadav is oozing class with his batting. The RCB on the other hand have a problem at plenty, their batting seems to be doomed without the contribution from their 2 stalwarts AB De Villiers and Virat Kohli. The over dependence on these 2 super star batsman makes life difficult and the RCB need someone to put up their hand in this crucial junction of the IPL.
Come and join us this live episode on Matchday Live with Cheeka, its fun engaging and we have a lot of interaction with all our viewers and most importantly we give out our fantasy predictions which have been terrific so far. Matchday Live is a daily live YouTube show along with Kris “Cheeka” Srikkanth and Anirudha Srikkanth, produced by Zealcity Studios and Adithyaa Srikkanth. It’s a lot of fun, banter but most importantly deep analysis and fantasy predictions for the game ahead.
Hope you join us today and if you like our episode please do consider sharing and subscribing to our channel.
#mathdaylive #fantasypredictions #MIvsRCB 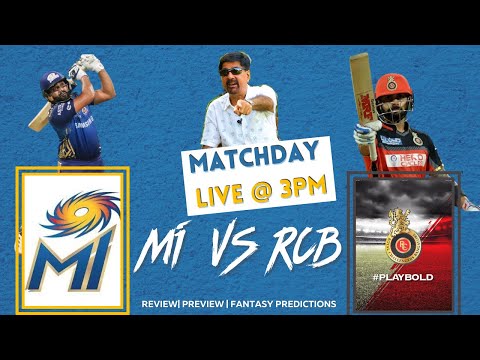