How To Write A Rap Song Without Getting Writer's Block (The Truth): Eliminate Writer’s Block In Rap Songs (VIDEO COURSE INFO): https://raptycoon.com/career

In this video, we will teach you how to make a rap song without worrying about writer’s block using simple to follow steps in this tutorial. If you have a desire to learn how to rap better, this video will help you in Hiphop music creation by using tried and true methods we’ve taught for years. This video on how to rap for beginners will help everybody who wants to learn how to start rapping and wants to avoid writers block. Enjoy!

How To Write A Rap Song: Order
The first and most important lesson you’ll learn in this article is understanding that you don’t have to write the song in a linear – or straight order.

In fact, many of the greatest songs and songwriters of all time in other genres than just rap – The Beatles, Michael Jackson, and so on – would come up with a chorus or a bridge and then ADD it to other verses later on.

Another way of thinking of this is like movies. When they make a movie, they don’t shoot each scene that you see in the finished product IN order…

…Or in your case as a songwriter, you can write different sections at different times in order to cut down on the chances your mind will go blank with writer’s block.

When I was first learning how to rap, I would write songs in the order that the song would be played…

…In other words, write the first verse first, the chorus second, the second verse second, and so on.

…As you begin to write more and more and want to write MORE songs… faster… you begin to realize that you might catch inspiration for a section of the song that ISN’T in the set order of the beat.

To use a common example, let’s say you hear a beat that is programmed in a way that has the first verse begin the song and the chorus come second.

As you are listening to the beat, you start humming a melody that you BELIEVE sounds like an amazing chorus.

Now, if you are following the “linear, in order” format of writing… you might think “Well that melody would be a GREAT chorus BUT I can only write the rap song in ORDER… so I will have to FORCE that chorus melody in the verse”.

So, you end up putting what would have been a GREAT chorus melody as the start of your verse, and then by the time you get to the chorus…

…You are now forced to think of ANOTHER melody to “fit in” to the chorus section of the song.

Times like these are where you end up getting writer’s block.

Write Whatever’s Easiest
What I would suggest is practice writing WHATEVER section you think of first in full, RECORDING it (or memorizing it)…

And THEN filling in the other parts after you’ve completed the section.

To explain this further, when people ask me questions like, “Which should I write first, the verse or the chorus?”

I always respond to them that they should write whatever comes first in your creative inspiration when hearing the beat, precisely BECAUSE it will lower the chances you will get writer’s block.

Write whatever comes easiest for you first. 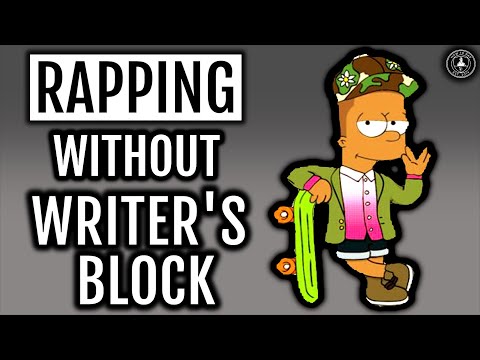 Author by: How To Rap