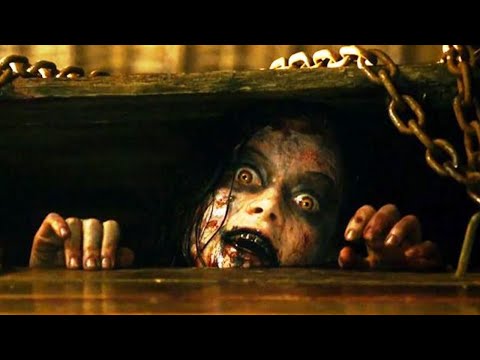 The Evil Dead (2013) horror movie explained in Hindi Urdu. The American Horror thriller film “Evil Dead” story summarized with full ending in हिन्दी explanation. The plot revolves around 5 friends who go towards the forest where there is an isolated cabin. This cabin is built away from the population that belonged to their parents. Inside this cabin, they see a hidden basement. When all these go inside it, they get a cursed book named “Book of the Dead”. They do not know anything, but as soon as they read the book, there comes the evil forces in the nearby woods which possess some of the friends. After all, only one friend remains, who with the help of this Evil Book, tries to get rid of those demons. This story is the modern version of the classic tale of Evil Dead. This is one of those most terrifying films that you all are about to experience. Please Like, Share, Subscribe.

Evil Dead is a 2013 American supernatural horror film (Full Horror Movie Explained in Hindi). I think this movie consists of very scary moments and takes you inside the fear state. I believe this film satisfies horror fan with a specific kind of unique storyline, thrill and fright. Indeed, this movie is a remake but is very much like its classic film. Every viewing person likes it even more than before. It gives you chill experience, fear and obviously it’s worth watching. Attracting original movie fans is not easy, but its unique storyline has done it. We all feel both fun and frightening to watch. We highly recommend “Evil Dead” to all of you.

Disclaimer: Any footage in this video has only been used to communicate a message (understandable) to audience. According to my knowledge, it’s a fair use under reviews and commentary section. We don’t plan to violate anyone’s right. Thanks.